The death of pop music icon David Bowie January 10, 2016, at the age of 69 has sparked tributes and remembrances the world over. Assistant Professor of Music Tracy McMullen recalls the Thin White Duke and the music that launched him into the stratosphere; other faculty members recall their favorite Bowie songs and what made them special.

David Bowie is pop music’s Andy Warhol. He made pop music that very consciously engaged the central shockwave of postmodernity: the self, and culture itself, are fictions. They may be powerful fictions; but they are fictions. This is terrifying and liberating. Bowie was a fan of the harbinger of postmodernity, Nietzsche. As he said in “Oh! You Pretty Things”: “We’ve finished our news/Homo Sapiens have outgrown their use. … Let me make it plain/You gotta make way for the Homo Superior.”

I think Bowie was going for Homo Superior himself. I hope he made it. Cutting to the chase with all of that would be a line from his song, “Quicksand”: “Don’t believe in yourself.” Eminently comforting. Stop taking your self so seriously. Let yourself change, because you are, anyway. Wear a power suit today, purple hair tomorrow. Shake yourself and others up.

Like Homo Superior, the answer was to “face the strain,” to become the creator in the face of a world unmoored from all “gods.” I don’t know, but it appeared that Bowie handled the news of his death well, considering all the work he did in his last two years. I think he was prepared. He had been thinking about these things for a long time. “Look out you rock-n-rollers,” his character Ziggy Stardust says, “pretty soon now you’re gonna get older.” —Tracy McMullen, Assistant Professor of Music 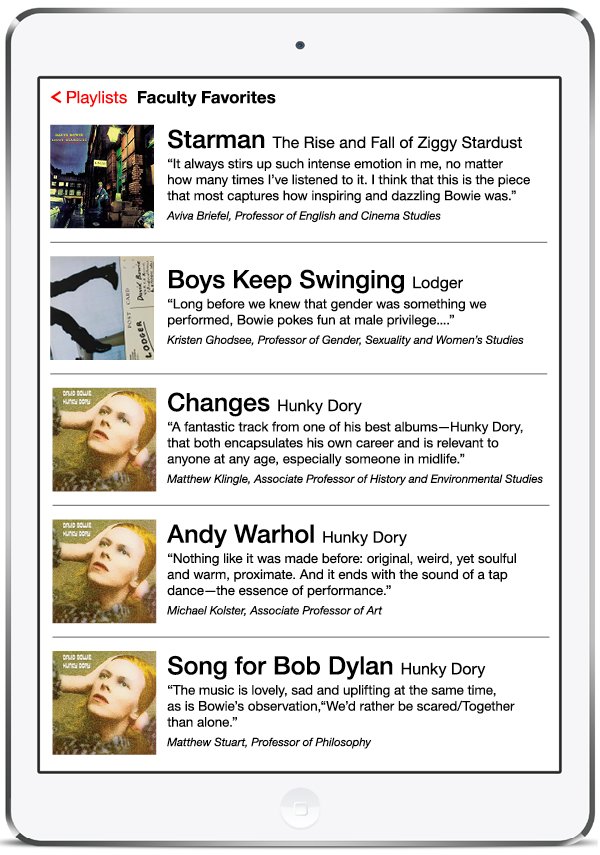 Some faculty members couldn’t limit their selection to just one favorite David Bowie song, and some had much more to say about Bowie’s influence.

Aviva Briefel, Professor of English and Cinema Studies:
If I had to choose just one, I’d stay “Starman” because it always stirs up such intense emotion in me, no matter how many times I’ve listened to it. Especially now, when we’ve lost our Starman. I think that this is the piece that most captures how inspiring and dazzling Bowie was.

As a child, Hayley Nicholas ’17 appeared with Bowie in an ad promoting his 2002 album Heathen. Read more about it and watch the video.

Dallas Denery, Professor of History:
The Next Day was the best thing he had recorded since the first side of Scary Monsters, so I am tempted to pick “The Stars Are out Tonight.” But my favorite Bowie album hands down from start to finish is Station to Station, and since every song on that record is a sort of endlessly satisfying cold soul marvel, I guess I’ll pick the title track because it lasts the longest. It has everything — pretension, melodrama, seriously art-damaged and hilarious lyrics, and constant tempo shifts. In other highlights, he “performed” another track from Station to Station, “Golden Years,” on Soul Train and that is a video to behold!

Kristen Ghodsee, Professor of Gender, Sexuality and Women’s Studies:
I have too many favorite Bowie songs to choose just one, since they change depending on my mood and the decade of my life for which I am nostalgic. As a 16-year-old girl growing up in San Diego, I watched Jim Henson’s film Labyrinth more than 70 times in the summer of 1986 because of Bowie; it was a local two-dollar theater and the staff let me stay in for all three showings each day if I bought popcorn during the intermissions. But as a professor of gender, sexuality and women’s studies at Bowdoin, I have to say that the best Bowie tune is the 1979 single, “Boys Keep Swinging.” Long before we knew that gender was something we performed, Bowie pokes fun at male privilege with lines like, “When you’re a boy: you can buy a home of your own, When you’re a boy: learn to drive and everything…” In the video, which was banned in the U.S., Bowie cross-dressed as three different women, and became the progenitor of gender fluidity. Bowie was always ahead of his time, and this weekend I will be among the thousands laying flowers at Hauptstrasse 155 where Bowie lived during his Berlin years.

Matthew Klingle, Associate Professor of History and Environmental Studies:
“Changes” (1971): a fantastic track from one of his best albums, Hunky Dory, that both encapsulates his own career and is relevant to anyone at any age, especially someone in midlife.
“Heroes” (1977): a collaboration with the ever-creative Brian Eno, it is an anthem of hope that has buoyed many a young person (or old) in moments of fear.
“Suffragette City” (1972): this is all about adolescent nostalgia: listening to my friend’s band, Too Quid, belting out a squelchy cover in packed basements and garages all across suburban Salt Lake City in the early 1980s.
“Panic in Detroit” (1973): Motown meets 1970s paranoia with hard guitar riffs and surreal lyrics, with great contributions from guitarist Mick Ronson.

Michael Kolster, Associate Professor of Art:
My favorite track is “Andy Warhol” from Hunky Dory, David Bowie’s homage to one of the other most important figures in western 20th century art and culture. I love how the song starts with a toy horn, then science fiction theremin-like noises and then ambient interview-like audio and bizarre laughter, all strange and obscure at first, like Warhol himself, but steps into an irresistible acoustic guitar groove, with the chorus: “Andy Warhol looks a scream hanging on my wall, Andy Warhol silver screen, can’t tell them apart at all” followed at the end by wonderful syncopated rhythms and harmonics. Nothing like it was made before: original, weird, yet soulful and warm, proximate.  And it ends with a the sound of a tap dance…the essence of performance, Warhol and Bowie, birds of a feather. I love it because when I listen to it I forget most everything else around me; I am transported, lost in the music every time. Supposedly Warhol hated it. Interesting, too, that David Bowie played Andy Warhol in the1996 film Basquiat. My second choice is “It Ain’t Easy,” because it isn’t.

Vineet Shende, Associate Professor of Music:
Favorite Bowie song? That’s very difficult — I love the surreal and funky “Ashes to Ashes” (1980), and the paranoid and aggressive “I’m Afraid of Americans” (1997), but if I had to choose one, it would probably be 1971’s “Life on Mars.” The harmonic progression is wonderful — the pre-chorus, for example, has an chromatically ascending bass-line with a slew of surprising applied dominants and chromatic mediants that rivals any Schubert lied in its complexity. And this searching, wandering harmony is enhanced by the lyrics, which describe the emptiness of escapism and longing for something better in life. From the glam rock of Ziggy Stardust, to the “Plastic Soul” of the Thin White Duke, to the New Romantic 80’s Bowie to the noise-and-industrial-influenced 90s Bowie, David Bowie was a restless, constantly evolving artist. I’m deeply impressed that when faced with terminal cancer, he responded not by releasing something tried, trite, or maudlin, but instead with the experimental “Blackstar,” whose title track concludes the journey begun by Major Tom nearly 50 years ago.

Matthew Stuart, Professor of Philosophy:
“Song for Bob Dylan” is one of my favorites on Hunky Dory, a 1971 album packed with great songs. Self-consciously imitative of Dylan’s paean to Woody Guthrie (“Song for Woody”), this at first sounds like an exercise in Dylan appreciation. Yet there’s almost always more than one thing going on in a David Bowie song. Dylan sang to Woody, but Bowie sings to Robert Zimmerman (Dylan’s original name) about Dylan. Are we being reminded that “Dylan” is a persona, a Zimmerman creation? Perhaps, but if so we’re being reminded of this by a man who was born David Jones! The song veers into obscure territory, and I can’t say I understand it all. The music is lovely, sad and uplifting at the same time, as is Bowie’s observation that “we’d rather be scared/Together than alone.”

Tricia Welsch, Professor of Cinema Studies
My favorite Bowie song admonishes its listeners to “turn and face the strange changes.” “Changes” was released when I was in high school and seemed to sum up everything my friends and I felt about being teenagers. We were on the verge of something big—adulthood—not that we thought much of most of the adults we knew. So the snooty lyrics appealed to us as well: “These children that you spit on as they try to change their worlds are immune to your consultations,” Bowie sang.
Time may change me. But this song, with its great thumping beat, has not aged. Only now it (helpfully) reminds me that young people “are quite aware of what they’re going through.” Look out, you rock-n-rollers! I want to put in a word for David Bowie the actor, since he was always marvelous to watch on screen. He could be stunningly believable as an alien (The Man Who Fell to Earth) or a vampire (The Hunger). But he was also unforgettable as Nikola Tesla in The Prestige, as Andy Warhol in Basquiat, and as Pontius Pilate in The Last Temptation of Christ. The musician who remade himself over and over was a chameleon in the movies, too.